Fast Reports NuGet-server We recently launched our own NuGet-server - a repository of licensed Fast Reports products for users. Now you can conveniently download the latest versions of our components on any operating system. More details in article . Added support for interactivity of the "Advanced Matrix" object in WebReport: All WebReports (.NET Framework, .NET Core, Blazor Server) now have interactivity support for the new Advanced Matrix. The collapse and sort buttons now work correctly in the browser. Ability to save the report with random data The file menu in the report designer has a new item "Save with random data...". When you save the report in this way, all data sources will be saved in the report and the data in them will be replaced with random values. Backlight of intersecting objects in the designer Now, when you place objects on the report page, the color will highlight the intersecting objects and objects outside of bands and page. In a correct rep
Post a Comment
Read more 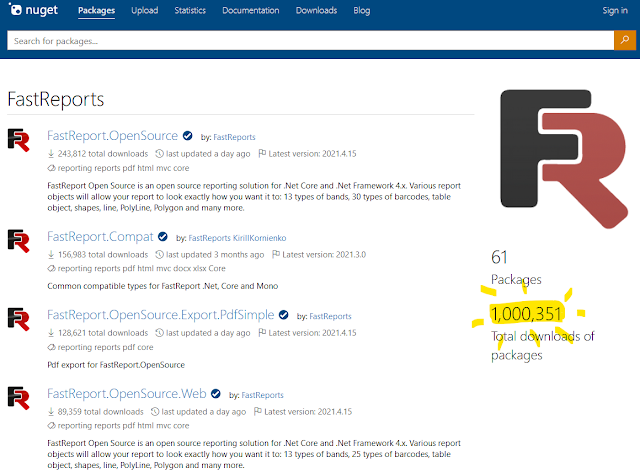 Number of FastReport Nuget packages downloads reached a 1,000,000 . Our packages on Nuget were downloaded over a million times! Around half of them are attributed to our open source project FastReport Open Source .  We want to thank you, our users, for your interest and dedication to our solutions.  Together we make sure that every app gets powerful reporting abilities and helps the end-users to receive information in the most efficient way.
Post a Comment
Read more

We are pleased to announce the new version of FastReport Open Source 2021.4 ! Many useful changes in the report builder core, in FastReport Designer Community Edition and in web reports. We are waiting for your feedback !
Post a Comment
Read more

Welcome to our Telegram Group and Channel 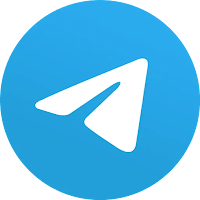 We have created a group and a channel on Telegram. We invite all of you to sign up to be updated on changes to FastReport Open Source . We are also happy to answer all your questions!
Post a Comment
Read more 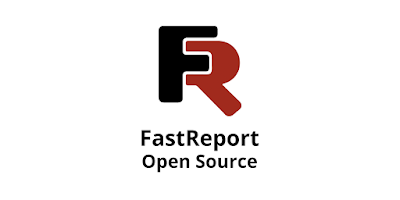 We are glad to announce the new version of FastReport Open Source 2021.3. The FastReport OpenSource version now has the ability to import DevExpress, List and Label and SQL Server Reporting Services reports.
Post a Comment
Read more

We are glad to announce the new version of FastReport Open Source 2021.2. Our report generator is now even more stable, faster and consumes less RAM. Among many improvements and bugfixes we should mention the new aggregate function CountDistinct, TLS 1.2 support, the possibility to copy data sources and High DPI support in FastReport Designer Community Edition.
Post a Comment
Read more 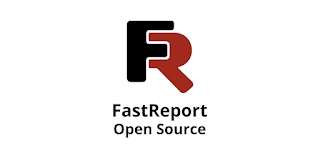 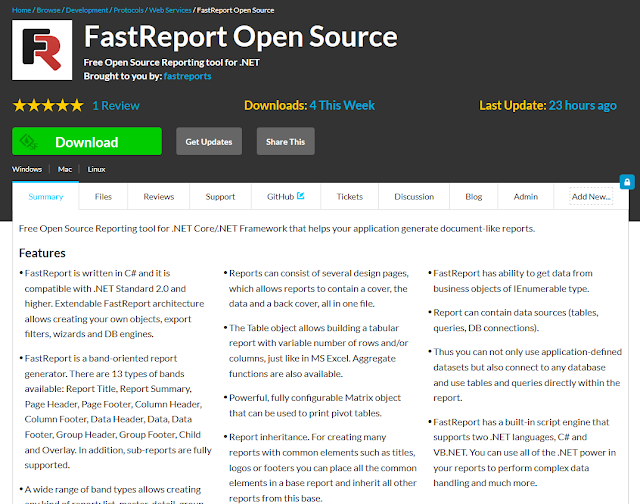 We are pleased to announce that we now have a release mirror on SourceForge.net and we are happy to welcome you there.   The main resource we still have is GitHub . Please write your suggestions and comments on FastReport Open Source development.
Post a Comment
Read more

On November 10, 2020, just 5 minutes before the start of the annual online conference .NET Conf 2020, the .NET 5 download page was updated. What the .NET developers all over the world have been waiting for has come true. No surprise happened - all innovations and improvements were known long before that moment. We saw .NET 5 RC1 and RC2 earlier in September and October 2020. Many developers have already tried .NET 5 in their projects. However, the moment of release of .NET 5 summed up the huge work that Microsoft developers have done together with many authors of the open source community . Shortly after the official release of .NET 5, Visual Studio 2019 update 16.8 was released with full support for all features of the new framework. Docker images for .NET 5 and .NET 5 SDK have also been published. What did we get with the .NET 5 release? First of all it is the consolidation of frameworks - now instead of separate Core, Mono, Xamarin we have a single .net5.0 target. In fact, the .n
1 comment
Read more
More posts